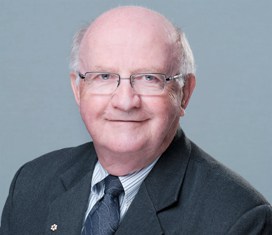 Dr. Lorne Babiuk is an internationally recognized leader in Canadian vaccine research who has devoted his career to Canadian-based research aimed at safeguarding the health of people and animals at home and abroad. The vaccines that he was involved in developing have had a significant impact on the economy as well as reduced mortality and morbidity caused by infectious diseases.

He specializes in immunology, pathogenesis, virology, molecular virology, and vaccinology, and is a world expert in infectious diseases and their control, specifically by vaccination. He has published over 500 manuscripts, awarded 42 patents, and trained over 100 PhD and post-doctoral fellows who have gone on to successful careers in academia, industry, and government.

Among his many honours, he is an Officer of the Order of Canada, a Fellow of the Infectious Disease Society of America, a Fellow of the Royal Society of Canada, and a Member of the European Academy of Sciences. Dr. Babiuk was also honoured to receive the Saskatchewan Order of Merit and to be inducted into the Saskatchewan Agricultural Hall of Fame. Dr. Babiuk was awarded the 2012 Canada Gairdner Wightman Award, the Killam Prize in health sciences in 2013, and the GCHERA World Agriculture Prize 2016.

Before taking up his position (2007-2017) as Vice-President (Research) at the University of Alberta, Dr. Babiuk was the Director of the Vaccine and Infectious Disease Organization (VIDO). During his time at VIDO, Dr. Babiuk built the organization into an international powerhouse carrying out major research in immunology, pathogenesis, virology, molecular virology, and vaccinology.