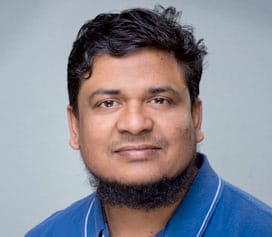 Hasan moved to Saskatoon from Bangladesh in 2010.

He received a BSc in Agriculture from Khulna University, Bangladesh and a MSc in Physical Land Resource Management from the University of Ghent in Belgium. After completing his MSc, he worked for Ministry of Agriculture in Bangladesh as a scientific officer. From there, Hasan moved to Canada to pursue a second MSc in Soil Science from the University of Saskatchewan. He then accepted a position working with the plant breeding team of Crop Production Services (CPS) Canada.

Effective December 1, 2019, Hasan Ahmed was welcomed into the role of International Program Development Manager while he completes his PhD in the roots program.

In his free time, Hasan loves to play badminton and go for long drives. He is very grateful for the amazing group of colleagues and friends he is working with in GIFS’ Root-Soil-Microbial Interactions lab.