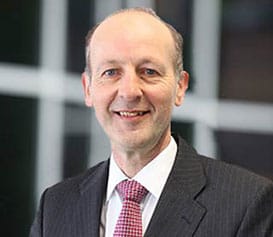 The University of Saskatchewan (U of S) and the Global Institute for Food Security (GIFS) board of directors are pleased to announce that current board member Stephen Visscher will assume the role of Interim Executive Director and CEO for GIFS beginning mid-November.

Visscher, who has extensive experience in forging new research partnerships and links with funders of food security research around the world, will remain a member of the board throughout this interim position. An international search for a permanent CEO is underway; the board hopes to fill the position by spring of 2019.

“Steve’s experience as a member of the GIFS board since 2015 and his long history of bringing together diverse teams in institutional, national and international partnerships through executive positions at the Biotechnology and Biological Sciences Research Council (BBSRC) in the United Kingdom, put him in an excellent position to oversee GIFS until a new CEO is named,” said recently elected GIFS board chair Alanna Koch.

Located at the U of S, GIFS is a partnership of Nutrien, the Government of Saskatchewan, and the U of S dedicated to addressing the increasing global demand for safe, reliable and nutritious food.

“I look forward to working closely with GIFS colleagues and collaborating with partners in the Saskatoon bio cluster and beyond,” said Visscher. “There is considerable opportunity to build on the excellent work done in GIFS’ founding years and assisting the organization in delivering its vital mission to develop new approaches to sustainable agriculture in Canada and the developing world.”

As Deputy Chief Executive at BBSRC, Visscher led the organization’s international activities and global partnerships, a position from which he recently retired. He previously served in other executive positions at BBSRC including Director of Finance, Interim Chief Executive, and Chief Operating Officer for seven years, a role that included international relations alongside other strategic initiatives such as UK Campus Developments.

Visscher has developed extensive links with the Consultative Group for International Agricultural Research (CGIAR). He took a leading role in establishing the G20 International Wheat Initiative and the International Wheat Yield Partnership, a public-private partnership. Over the past five years, he led the UK delegation to G20 meetings of agricultural chief scientists in Russia, Australia, Turkey, Germany and Argentina.

His external roles have included Chair of the Institutions’ Committee of the G20-sponsored Global Wheat Initiative, Vice Chair of the International Wheat Yield partnership, director of the Norwich Research Park Campus Partnership, trustee of the Medical Research Foundation and LifeArc charities, and observer member on the boards of two leading institutes—Rothamsted Research and the Institute of Biological, Environmental and Rural Sciences.

Visscher is a Fellow of the Royal Society of Biology, the Chartered Institute of Management Accountants, and the Institute of Internal Auditors. For his support for scientific research, Visscher was honoured in 2013 with the title Commander of the Order of the British Empire, awarded for outstanding work in the respective individual’s field.

Visscher succeeds Maurice Moloney who will retire from GIFS on November 30, 2018.

As the first permanent Executive Director and CEO of GIFS and together with GIFS founding partners, Moloney helped create a world-class research institute which today includes over 50 staff, 40 of whom are distinguished researchers in their field who have come to work in Saskatoon from over 15 countries,” said Karen Chad, U of S Vice-President Research.

Moloney also served as program director for the U of S Plant Phenotyping and Imaging Research Centre, where more than 250 U of S researchers, students, partners from several Canadian and international universities and more than 15 private and public corporations work on research projects designed to generate a range of data-rich technologies, products, and services.

“Maurice played a key role in building this collaborative, trans-disciplinary research program that will fundamentally transform seed and plant breeding of large-area crops essential to global food security, including wheat, canola, and lentils, and his vision has helped make GIFS a focal point for innovative research in the agriculture and agri-food sector,” said Chad. “We thank him for his years of service and wish him well in his future endeavours.”